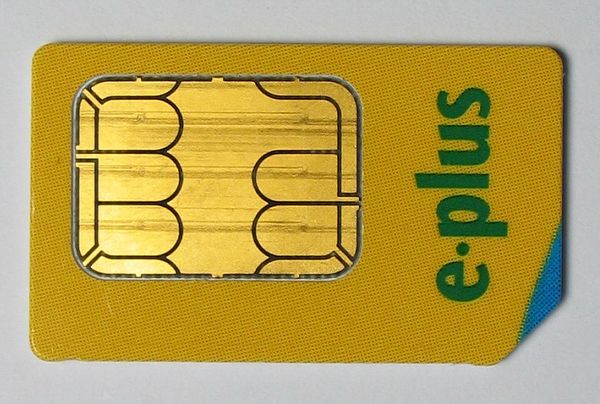 The UICC (Universal Integrated Circuit Card) is a smart card which contains account information and memory that is used to enable GSM cellular telephones. One of the applications running on the smart card is the SIM, or Subscriber Identity Module. In common parlance the term "UICC" is not used an the phrase "SIM" is used to describe the smart card itself.

Because the SIM is just one of several applications running on the smart card, a given card could, in theory, contain multiple SIMs. This would allow multiple phone numbers or accounts to be accessed by a single UICC. This is seldom seen, though there is at least one "12-in-1" SIM card being advertised at present.

Although UICC cards traditionally held just 16 to 64KB of memory, the recent trend has been to produce SIM cards with larger storage capacities, ranging from 512MB up to M-Systems' 1GB SIM Card slated for release in late 2006.

Each SIM is internationally identified by its ICC-ID (Integrated Circuit Card ID). ICC-IDs are stored in the SIM card and can also be engraved or printed on the SIM card’s body during a process called personalization. The number is up to 18 digits long with an addition of a single “check digit” that is used for error detection. This single digit allows us to detect an input error of digits, mistyped digits or a permutation of two successive digits. This digit was calculated using the Luhn algorithm.

These digits can be further grouped for additional information:

Operation networks for cell phone devices are divided into area locations called Location Areas. Each location is identified with its own unique identification number creating the LAI (Location Area Identity). A phone will store this number on its SIM card so it knows what location it’s in and to be able to receive service. If a phone were to change to a new Location Area, it stores the new LAI in the SIM card, adding to a list of all the previous LAIs it has been in. This way if a phone is powered down, when it boots back up, it can search its list of LAIs it has stored until it finds the one its in and can start to receive service again. This is much quicker than scanning the whole list of frequencies that a telephone can have access on. This is a real plus for forensic investigators because when a SIM card is reviewed, they can get a general idea of where the SIM card has been geographically. In turn this tells them where the phone has been and can then relate back to where the individual who owns the phone has been.

Information inside the UICC can be protected with a PIN and a PUK.

A PIN locks the SIM card until correct code is entered. Each phone network sets the PIN of SIM to a standard default number (this can be changed via handset). If PIN protection is enabled, the PIN will need to be entered each time phone is switched on. If the PIN is entered incorrectly 3 times in a row, the SIM card will be blocked requiring a PUK from the network/service provider.

A PUK is needed if the PIN is entered incorrectly 3 times and the SIM is blocked (phone is unable to make and receive calls/texts). The PUK can be received from the network provider, or possibly the GSM cell phone manual. Caution: if PUK is entered 10 times incorrectly, the SIM card is permanently disabled and must be exchanged.

The data that a SIM card can provide the forensics examiner can be invaluable to an investigation. Acquiring a SIM card allows a large amount of information that the suspect has dealt with over the phone to be investigated.

In general, some of this data can help an investigator determine:

There are many software solutions that can help the examiner to acquire the information from the SIM card. Several products include 3GForensics SIMIS 1, Inside Out's SIMCon, or SIM Content Controller, and Paraben Forensics' SIM Card Seizure.

The SIM file system is hierarchical in nature consisting of 3 parts:

These software titles can extract such technical data from the SIM card as:

This information can be used to contact the service provider to obtain even more information than is stored on the SIM card.

A Universal Subscriber Identity Module is an application for UMTS mobile telephony running on a UICC smart card which is inserted in a 3G mobile phone. There is a common misconception to call the UICC card itself a USIM, but the USIM is merely a logical entity on the physical card.

It stores user subscriber information, authentication information and provides storage space for text messages and phone book contacts. The phone book on a UICC has been greatly enhanced.

For authentication purposes, the USIM stores a long-term preshared secret key K, which is shared with the Authentication Center (AuC) in the network. The USIM also verifies a sequence number that must be within a range using a window mechanism to avoid replay attacks, and is in charge of generating the session keys CK and IK to be used in the confidentiality and integrity algorithms of the KASUMI block cipher in Universal Mobile Telecommunications System (UMTS).

In Mobile Financial Services, USIM seems to be a mandetory Security Element for user authentication, authorization and stored credentials. With the integration of NFC Handset and USIM, users will be able to make proximity payments where the NFS handset enables contactless payment and USIM enables independent security element. This is the evolution of the SIM for 3G devices. It can allow for multiple phone numbers to be assigned to the USIM, thus giving more than one phone number to a device.

Service Providers that use SIM Cards in the United States

Originally the middle-European GSM network used only a 7-bit code derived from the basic ASCII code. However as GSM spread worldwide it was concluded that more characters, such as the major characters of all living languages, should be able to be represented on GSM phones. Thus, there was a movement towards a 16-bit code known as UCS-2 which is now the standard in GSM text encoding. This change in encoding can make it more difficult to accurately obtain data form SIM cards of the older generation which use the 7-bit encoding. This encoding is used to compress the hexadecimal size of certain elements of the SIMs data, particularly in SMS and Abbreviated Dialing Numbers.

The authentication key or Ki is a 128 bit key used in the authentication and cipher key generation process. In a nutshell, the key is used to authenticate the SIM on the GSM network. Each SIM contains this key which is assigned to it by the operator during the personalization process. The SIM card is specially designed so the Ki can't be compromised using a smart-card interface. However, flaws in the GSM cryptography have been discovered that do allow the extraction of the Ki from the SIM card, and essentially SIM card duplication.