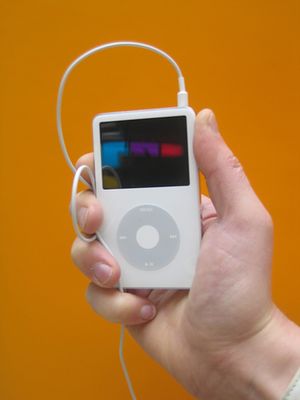 The iPod is a brand of portable digital media player designed and marketed by Apple Computer. Devices in the iPod family provide a simple user interface designed around a central scroll wheel (with the exception of the iPod shuffle). The standard iPod model stores media on a built-in hard drive, while the smaller iPod shuffle and iPod nano use flash memory. Like most digital audio players, an iPod can serve as an external data storage device when connected to a computer.

The iPod can play MP3, WAV, M4A/AAC LC, Protected AAC, AIFF, Audible audiobook and Apple Lossless audio file formats. The fifth-generation iPod can also play .m4v and .mp4 MPEG-4 video file formats. The Microsoft Windows version of iTunes can transcode regular non copy-protected WMA files to an iPod supported format. WMA files with copy protection cannot be played in iTunes or be copied to an iPod. Reviewers have criticized the iPod's inability to play some other formats, in particular the Ogg Vorbis and FLAC formats. MIDI files cannot be played on iPods, but can be converted into a compatible audio file format by choosing the "advanced" menu on iTunes.

Apple designed the iPod to work with the iTunes media library software, which lets users manage the music libraries on their computers and on their iPods. iTunes can automatically synchronize a user's iPod with specific playlists or with the entire contents of a music library each time an iPod connects to a host computer. Users may also set a rating (out of 5 stars) on any song, and can synchronize that information to an iTunes music library. Apart from iTunes there are also several third-party applications available that can be used to transfer songs to the iPod. iTunes lacks the ability to transfer songs from iPod to computer because of legality issues, although there are third party programs that circumvent Apple's protection.

In addition to playing music and storing files, the iPod has limited PDA functionality. Since January 2003, Mac users have been able to synchronize their contacts and schedules Address Book and iCal to their iPods through iSync. With the 2005 release of iTunes 5.0, Apple integrated contact/schedule syncing into iTunes and added the ability for Windows users to synchronize their contacts and schedules from Microsoft Outlook and Outlook Express. Although Mozilla Calendar and Mozilla Sunbird iCalendar have the same file format used by iCal and the iPod, there is no way to automatically sync schedules among these programs. However the files can be manually dragged and dropped into the correct directory on the iPod.

The limited PDA calendar functions of the iPod are somewhat tainted for users from Newfoundland and parts of Australia. Their time zones are excluded from the iPod's firmware, leaving them unable to properly sync calendar events and alarms to their devices. No workaround (including mentally converting times when reading them) is functionally acceptable due to the combined behaviours of iSync, iCal and the iPod with regards to converting events between time zones. Apple has yielded no commitment to correct this problem as of January,2006.

iPod can also display notes, and hence host simple games and store restaurant information. However, iPod has limitations as a PDA, since users cannot edit this information on the iPod except through a computer.

Apple currently markets three distinct players bearing the iPod name. Some models come with different capacities (a higher capacity allows the storage of more music) or with different designs. The model range as of February 7, 2006 includes: